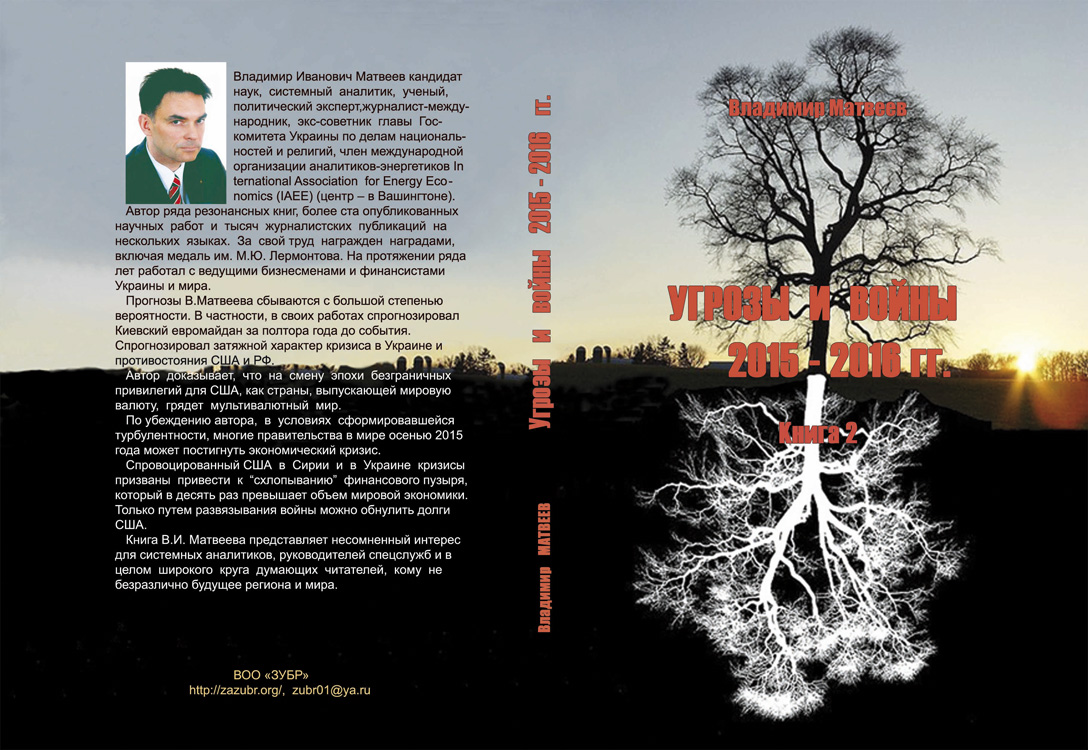 In his new book, “Threats and Wars 2015-2016” V. Matveev sets to undertake a critical look on the roots of the US exceptionalism and its manifestations in the US foreign, military and financial policy in post-Soviet region in the decades following the dissolution of the USSR. Operating on the basis of rich historical and political knowledge and facts, the author describes what he sees as the outcomes of US global expansionism and interventionism and suggests the potential scenarios of how the fast approaching collapse of global financial markets may force the US to unleash new and dangerous world conflicts in an attempt to rescue its reserve currency - the US dollar.

The book, written in two parts, uses a rich array of online media sources as well as closed sources data available to the author. Book One takes Ukraine as a point of departure and analyses the turbulent events in that largest Eastern European nation, following the overthrow of the regime of President Victor Yanukovych in February 2014, and the extent to which the US has been involved in that country’s economic and political developments.

The second part begins by asserting the coming of the crisis in global governance systems and the search of nations for the new world order, while the US neo-conservative ‘hawks’, or neo-cons, are desperately trying to maintain the US dominant position. The author characterizes the current historic period as the beginning of the new ‘arms race’ and the return of ‘nuclear deterrence’ era when he states that existing global contradictions have reached a critical point that might lead to igniting smoldering conflicts within a wider Eurasia region that could involve China, Russia, with a potential of regional conflicts growing into large-scale confrontations.

The resolution of these conflicts would only be possible if the new rules for the new world order are drawn, primarily between US, Russia, European Union, and China, on the new division of world markets, and a compromise is found in Russia-Ukraine relations and on the gas transit issues to European markets. However, current developments suggest that this outcome may be rather unlikely. Rather, as the second book concludes, for the US “Financial Bubble” implosion, only a new war, artificial crisis in Syria and in Ukraine, and further chaotization in Eurasia may seem the only possible solution in order to nullify massive US debt and restore the dollar.

The book addresses a variety of audiences and targets those with a special interest and stake in post-Soviet policy and security issues.

The BOOK published in January 2015, Kiev

Vladimir Ivanovich Matveyev (Matveev) is a political science analyst, expert on geo-politics and geo-energy studies. A graduate from Kiev State University and Asia-Africa Institute at Moscow State University, with a doctorate from Central European University in Budapest, he is the author of over 100 published scientific papers and books and more than 3000 printed and online publications focusing on a wide range of topics including international and interfaith relations, current policy analysis of former Soviet Union (FSU) states, Israel, global arms trade, global financial markets, analysis of oligarchic clans and systems etc. V. Matveev, in his books, predicted important events in political and economical life in the world.